Roman Marek was born and raised in Ipswich, he has already established himself as a firm favourite with theatre audiences throughout the U.K. as an actor dancer, singer and comedian. He has been applauded in such classics as Pal Joey, Hello Dolly!, Sweet Charity, The real monty comes again, Cabaret (where he achieved the distinction of being the youngest actor ever to play the coveted role of M.C.) Dame Lucy Bunn and Reg (a comedy duo on the cabaret circuit in such places as Benidorm etc.) also with a host of television credits to his name. Soap fans may recognize him from Channel 5's Family Affairs or indeed the X Factor. Roman is a performer with his feet very much on the ground, unless of course he's on the high seas cruising around the world playing Frank Sinatra in the critically acclaimed Rat Pack. It's his love of the Swing and Jazz era that has really shaped his career to date, singing with several big bands worldwide. From The Cat Pack Orchestra, and a warm up act for Chuck Berry and The Mini Big Band, Roman is the band leaders favourite front man. Recently Roman has fulfilled a life long goal of singing at the Rockerfella Centre, New York, performing on a revolving stage that has been graced by all of his heroes, originally opened by Fred Astaire and Ginger Rogers back in the 1920s and then all the greats followed, Ella Fitzgerald, Ray Charles, Tony Bennett and of course the Chairman of the Board Mr Frank Sinatra himself. Currently Roman has been putting his heart and soul into writing, directing and producing Crooners, and hopes it will be enjoyed for years to come. His wealth of experience and good old fashioned charm makes Roman a real cool crooner and one of the nicest Cats you are ever likely to meet prowling the stage. 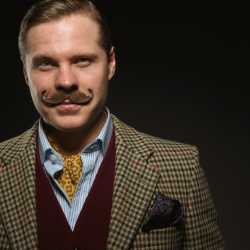