A choirboy and flutist from an early age Jim’s love of music deviated somewhat when he applied his skills to football and went on to play for Manchester City and Northern Ireland. An abrupt injury forced him back into music where small bars and functions were the beginning of an ever expanding singer career. He was thrown in at the deep end as a guest performer at the Manchester Opera House supported by a 22 piece band. Recordings soon followed with an artist for their debut album with the record label Babel and an appearance at ‘Tee In The Park’ performing music on the acoustic stage. He was invited to appear live on the Ricky Hatton show where he performed his own song entitled “You’re Not Down and Out.”

Jim broke into the theatre world with his portrayal of Nat King Cole in the production of Christmas Crooners and Strictly Swing. He joined the Rat Pack tour as Sammy Davis Jnr where he performed alongside a full West End cast and The Barry Robinson Big Band. His meteoric rise has seen him support Billy Ocean, Girls Aloud and perform at celebrity privates parties. Jim has travelled extensively around the world performing for both the private and corporate world in Mumbai, Auckland, Bora Bora, LA and The Rainbow Rooms in New York to name a few. He also had the pleasure of performing alongside Grammy Award Nominee Judy Carmichael courtesy of NGM Productions. 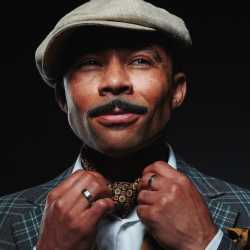